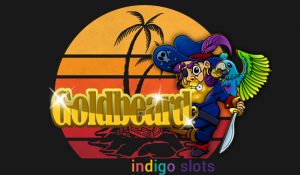 Players now also have the opportunity to get acquainted with RTG’s online slot game Goldbeard (the shiny yellow beard, reminiscent of the gold). A slot machine with the theme of pirates, treasure islands, and gold coins.

Developed by RTG (Real Time Gaming), this game has five reels, three rows, and a maximum of twenty pay lines that can be easily changed in the game by simply pressing a button on the sides of the game.

Here you will find the online progressive jackpot. You’ll also see that the jackpot converts from point to point at the end of each game. You can quickly check or determine the progressive jackpot that goes from one step to the next every time you, being a slot machine player. It could be awarded randomly at any point in the game. That’s why it’s important to prepare in advance so you can see that Golden Beard treasure that’s going to fall right under your feet. It’s up to you then to collect the gold as quickly as possible and run at full speed to hide it in your ship.

It is interesting to know that all the winnings are paid from left to right, except for the Scatters. Only the highest winnings are paid. You can also consider the automatic game option. All of your invaluable efforts will somehow win you up to 24 free spins when a GoldBeard Head coin is present on reel 1 or 5. What’s also charming about this game is the fact that all winnings will be paid out x3 when you are in Free Spin mode. The second symbol that is considerable or of great interest, and which is also the GoldBeard pirate’s head, is the one that is completely on your side and is placed on reels 1 or 5. It is the one that puts itself in the place of another symbol to complete a winning combination in the game. Your winnings will then be twice as much.

Several symbols are on the theme of pirates. You will see a 16th-century ship, a pirate with a blue hat, a parrot, a cannon, a gold coin, and the treasure chest. Among these symbols, two are more important than the others, and they are the ones with extraordinary or specialized functions.

The Goldbeard Slot Machine is a very interesting game for players. It’s a game like the lyrics on aboard. It’s a game that is only there to recreate you and offer you its jewels and treasures. It would be best if you took advantage of it to launch yourself into the world of piracy in the RTG way.