Finn’s Golden Tavern it’s a slot machine with twenty-five cells for images on the main screen. Icons are arranged according to the 5×5 scheme. It is not necessary to talk about the reels in this case since new icons appear from the lower-left corner and move in a spiral to the center during the spin.

There are no active lines. The bet is accepted for the round. It is a multiple of ten and starts at 0.10 euros. Check the maximum limit in the online casino.

Paid chains are compiled using the Cluster Pays system. It implies that at least three identical icons must be located somewhere on the field, touching each other horizontally or vertically. Often, several combinations of different images are formed in one round.

Winnings are calculated based on the coefficients specified in the table. Each combination has a multiplier. The second parameter of the calculation is the current bet per spin.

Symbols from the paid combination explode as soon as the money arrives on the customer’s balance. One of the vacant cells is occupied by the Joker star. The remaining positions are filled with images that move in a spiral. These functions are called Avalanche and Wild Generation. The process continues until new lines are created.

There is no risk game. Bonuses, types of symbols and other features of the model are discussed below in the review of Finn’s Golden Tavern. 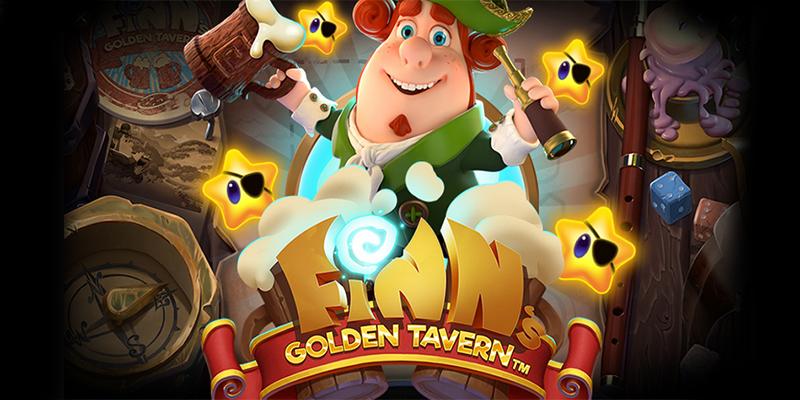 The slot machine looks like a Board game that lies on the table in a tavern where sailors like to visit. To the left of it are a compass, a mug of beer and a branded stand for glasses with the logo of Finn’s Golden Tavern. On the right, you can see a dagger stuck in a tree and a burning candle. Images are presented as game chips that move around the field.

Coins, bottles, mugs, glasses, and other items that can be seen in the tavern appear on the screen. Identical icons can follow each other in chains.

Check the payouts for all available combinations in the paytable of the Finn’s Golden Tavern video slot.

Free Spins – during free spins, the amount at stake does not change, but the casino puts money for the player. In each run, the compass increases the additional multiplier by one. It is taken into account every time payments are calculated.

Finn’s Golden Tavern does not have the NetEnt progressive jackpot.

Let’s explain the meaning of labels in the game interface:

When choosing a bet, you need to specify the number and denomination of coins.

The three buttons in the center perform the following functions (from left to right):

The speaker turns off the sound. The three bars on the left open a menu with adjustments, a paytable, and rules. You don’t need to download the slot machine.

The slot has a version of the interface designed for smartphones. Mobile Finn’s Golden Tavern has a simplified control panel but in no way inferior to the main version of the game. It is more convenient to use it in the landscape orientation of the screen. In this case, it is especially comfortable to direct actions with your fingers. System requirements are not high. The basic rules are standard.

It’s a fact that Finn’s Golden Tavern is no worse than the first game about this character. Moreover, the gameplay seems even more interesting and diverse. As for the graphics, it has become even better and more spectacular. So be sure to test the new product.

The volatility index is just below the average.

Where can I play Finn’s Golden Tavern for free without registration or for real money?

The free version is already available on our website. Try out the Finn’s Golden Tavern slot machine in the demo version without risking money.

Write reviews about Finn’s Golden Tavern in the comments, do not forget to rate the model.